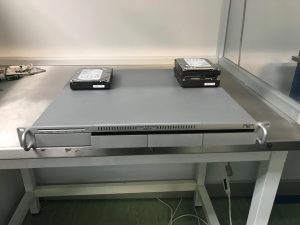 RAID 5 level is currently the most common RAID system used by production companies and design agencies as it provides more usable storage facility than other RAID systems. It provides RAID 0 performance with more economical redundancy as It stripes block data across several hard drives – a minimum of three and usually five hard drives per RAID group – while distributing parity among them. Since data protection comes from parity information in RAID 5, in most cases, when there’s an issue with the system, data has to be reconstructed from the failed hard drive in order for the data to be recovered.

A few days ago, our technical team was given a Sonnet R400 RAID 5 USB3 external drive by a central London design agency. The description of the fault given by the client was that the ‘enclosure or controller appears to be faulty and suddenly disconnected from server. Reconnecting to server or Mac unsuccessful and device didn’t appear in Disk Utility or System Report on either machine. Disks appear to be ok as green light appears for each of 4 disks on device front panel. Four drives of 2TB each in RAID 5.’

How to repair and rebuild the RAID 5? 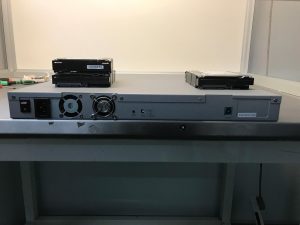 Data Doctor identified that two of the four 2TB hard drives had bad blocks and the entire system was running on the hot spare main drive which had now failed meaning the RAID had collapsed.
Our team had to carry out a complex data recovery procedure that required to repair the third drive and rebuild the RAID by imaging it. We used PC-3000 RAID utility for us the repair the drive and extract the data, sector by sector and surface by surface from each of the eight surfaces of the drive, starting with the good ones first and moving to the bad ones afterwards, and putting it onto a new drive. We had to acquire the same hard drive which the same number of sectors to reconstruct the data as, otherwise, the sector count would be different and would have made the recovery unsuccessful.